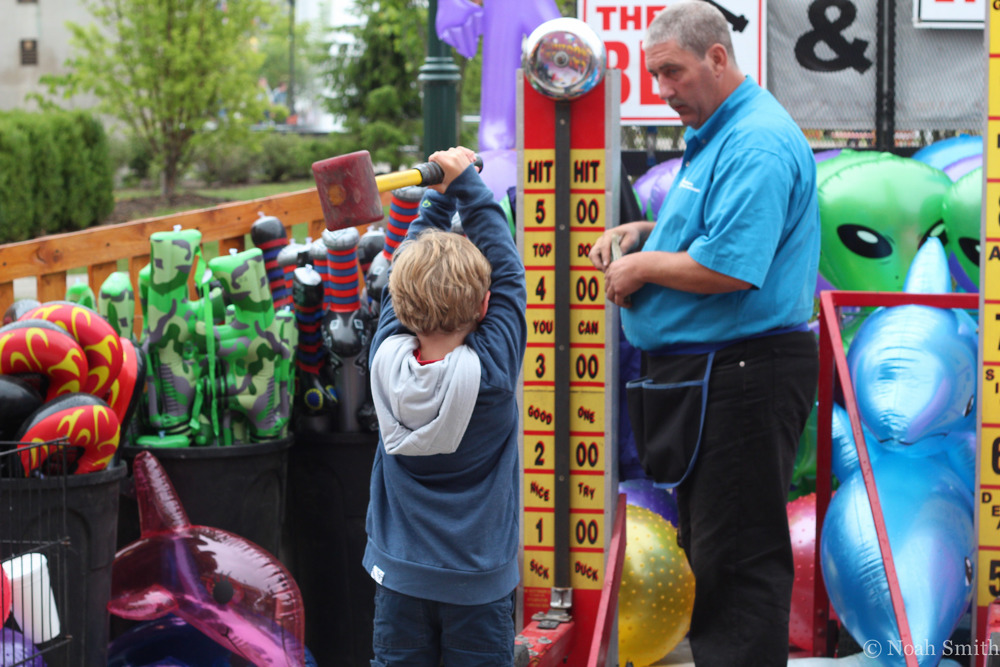 Local boy, about to win a prize.
Local boys in anticipation of the shot.
For the win...
The ball hit the rim and...
...went in. Amazingly.
The slide bookended the fair area and soared above nearby buildings.
Miles, a lifelong gamie, explains the rules of his game.
This "gamie's" partner attributed his lack of customers to his hat.
Maurice and Darryl await their next contestants.
Jay, an Ohio native and 8-year vet , was in hostile Michigan territory.
His experience allowed him the bridge the gap. Although, not in this particular case.
Everyone is a winner.
The three onlookers assisted in aiming and moral support.
Didn't quite get it this time.
A brief respite in the action.
A local mother helps her daughter take aim at Miles' booth.
The fair was held in the middle of town.
Inquisitive potential contestants- all ages welcome at the midway.
Mike, a new father, offers some tips for success.
Miles grew up in the carnival, but is working to transition to a career as a tattoo artist.
The weather held out.
p

Carnivals loom large in the American collective memory. In what has become increasingly rare, all living generations have experienced this event in a similar fashion: warm summer nights, friends (or a nice girl/ guy), the midway, rides, interesting fried foods.

Malt shops, sock hops, arcades, and even record stores are mostly gone, but carnivals remain- and are as alluring as ever.

Every year since 1963, the traveling carnival has come to the cozy downtown of Birmingham, Michigan, a suburb of Detroit. Kids look forward to it, as do many of their parents, who are able to share memories from the Birmingham carnivals of yesteryear.

Miles Huston also has long memories of time spent in the shadow of the flashing lights, though his are from the other side of the booth. Huston "grew up in the life," as he put it, working with his family. "I have seen kids grow up over the years, in different cities," he said. "The same ones come back year after year and I know them and they recognize me."

It is not always a happy annual reunion though. "Kids today are disrespectful, they have no respect. They think they are playing 'Call of Duty' (a popular first-person shooter video game) at the booth here," Huston said. "I had one person tell me ' You should get back to work because you need the money'. I had a punk in Dearborn throw a water bottle at me. It's because they don't get whipped."

More serious incidents have occurred as well. Once, a youth spit on him. Huston also described the time a gunfight took place in front of his booth. A young man was shot and bled to death in front him. "That kinda changed me, seeing that, you know? The last thing that guy saw was the flashing lights."

Throughout the months of constant travel, the inherent pressures of a commission-based sales job, and the special challenges of working at the carnival, Huston and his co-workers (N.B. "carnie" is a hurtful epithet, though one that they have tried to reclaim for use solely amongst themselves, similar to another well-known case of slur reclamation), benefit greatly from the camaraderie that develops during time spent on the road. Whether back at "trailer city," at the booth, or on the road, the crew is able to bridge generational, racial, and international gaps.

"I know almost everyone working here, some since from when I was born, and I trust them," said Huston. "Once at a bowling alley, some guy knocked into me and started talking shit and before I could turn around, five of my guys were on him," he said.

Jay, no last name given, a fellow gamie, noted that while there is a camaraderie, there is also a de facto line that separates the gamies, mostly Americans, from the ride jockeys, mostly foreigners. "They bring foreigners in because they know they won't use drugs, or else they get deported. They managed to outsource even that," he said.

Traveling throughout half of the year, a certain kind of knowledge has a way of accumulating, garnered from hours upon hours of standing and observing people in different towns across the country.

Despite having never lived in Michigan, Miles is able to run off a list of local towns and then accurately sum up the prevailing socioeconomic and demographic breakdown of them all. He then alludes to, but never explicitly reveals, his preferred sales tactic in each one. "Within two seconds of looking at you, I know how to talk to you," he said.

It can be hard to separate the fact from the hyperbole at the carnival, a venue that seems to have been designed to conflate the two. Two 20-something guys were able to draw a crowd of kids to a basketball shootout game by, loudly, referring to a wager of $5,000. As shots went up, onlookers held their collective breath, then let loose with outbursts of emotion, depending on if it went in or not. They cared, and felt involved. Perhaps more so, because the players were not millionaires or athletic freaks playing in sparkling arenas, they were just like the crowd, regular people. Anything could happen. A fortune was to be made or lost. A quick and clear winner, and loser.

The carnival fits in well with a certain slice of the American ethos. You can prove your worth in the context of cut-and-dry competitions and can prove your mettle by hopping on the fastest, wildest rides. The lights are bright, the gratification is instant, and, dammit, it's fun. And then, win or lose, brave or meek, you can enjoy an elephant ear on the ferris wheel, overlooking your hometown. This is not Disneyland; this is where you actually live, transformed, if only for a few days.

Huston hopes to be able to transition to a career as a tattoo artist. He currently sells his art online and has also enrolled in post-secondary English classes, which he wants to continue pursuing. Despite the allure of putting the carnival life behind him, "It is hard to imagine doing something else, this is what I have done my whole life," he said.